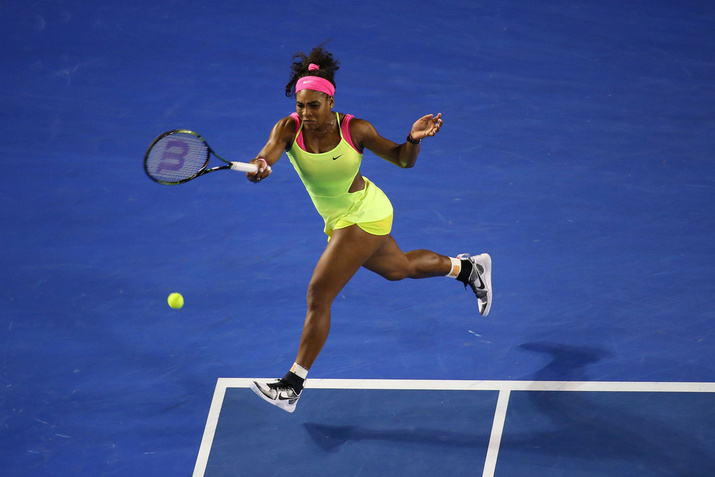 Without a doubt 2015 has been a fantastic year for Serena Williams. The only blot was a surprise defeat at US Open. At 34 years of age she remains one of the oldest grand slam winners and now well into the twilight of her career how long can she continue? Certainly Steffi Graf’s Open Era record is well within her grasp. Are there any consistent challengers to another year of history making for the current holder of the French, Australian and Wimbledon grand slams?

I think it’s fair to say that since the ascent of the Williams sisters around a decade ago they have certainly had a stranglehold on the major tennis tournaments. Without injuries, illness and family tragedy they would probably have amassed an even greater haul of major honours by this point. Henin, Hingis and Capriati all claimed major honours along the way, but just like during their childhood the biggest battles the Williams sisters have faced have been against each other. Can the likes of Eugene Bouchard, Sloane Stephens or Petra Kvitova begin to develop their games further or will Maria Sharapova continue to present the only serious challenge to Serena adding more titles to her collection. We take a look at this superstar’s upbringing and what makes Serena such a formidable opponent.

The Michigan born tennis ace moved to California as a small child where she began to learn tennis at the age of three. Throughout her and sister Venus’ childhood the girls were home schooled by father and mentor Richard. Keen to stay as involved with his daughters’ development as possible, Richard removed the girls from the US junior tennis ranks at the age of ten siting their home environment was the best place for them. His unorthodox approach seems to have paid dividends. Their tenacious, head-to-head approach bought great challenges but the family ensured the girls remained closer than ever. The mutual respect for each other’s strengths and weaknesses made the Williams’ into a formidable doubles team. It’s often overlooked with such grand slam single’s success that Venus and Serena have claimed 13 women’s grand slam doubles titles.

Power is the word most associated with Serena’s game. Her serve, constantly clocking over 120mph is regarded by many as the best ever in the history of women’s tennis. Her blistering ground strokes on both the forehand and backhand side unsettle opponents. All the years spent taking on Venus at age group level ensure she is always looking to take the ball early, well inside the baseline. Arguably at her best, Venus was the better mover around the court so Serena has always had to work hard on this aspect of the game. Both sisters barely understand the meaning of a defensive stroke, Serena in particular looks to try and dominate the point early.

On top of her blistering serve Serena has pioneered the use of an open stance two handed backhand which allows her to engage her hips more to produce maximum power whilst recovering her position on court quicker after the shot. This efficiency of movement is important as it always makes your opponent play one more ball. As with all great champions her physical dedication to her sport is second to none. This was highlighted perfectly after her second round win over Kiki Bertens at the US Open this year where she went straight back onto the practice court after the match to work on her serve. There’s no let-up in her desire and Serena’s new coach Patrick Mouratoglou seems to be working wonders with the 34 year old.

Arguably the difference between winning and losing at the highest level is the ability to produce your best when it matters most. In a tennis player’s case, not being hesitant during the big pressure points is a trait they all share. It is no surprise then that Serena has faced match points in three grand slam finals and comeback to win, more than any other female player. The number of times she is break point down and produces a huge ace cannot be considered a coincidence. The only thing stopping the ever increasing size of the Williams’ trophy cabinet can be the effect of all this power-play on an ageing body.  Only the effect such worldwide success can have on desire to achieve more. With greatness already achieved, a place in tennis history secured, all that remains for Serena is two more grand Slams and Steffi Graf’s Open record.