The Chromebook 2 is one of the cheapest laptops on the market to come with a full HD screen but how does the rest of the computer stack up?

The screen first and foremost, is a substantial upgrade from the previous Chromebook 1. The only other laptop in the Toshiba range with this kind of screen quality is the Chromebook Pixel which is comes in at AED 5,000, almost triple the cost.

The 13.3inch screen Chromebook 2 is a great compromise. It provides more quality and readability than the smaller options but packs less bulk and is easier to transport than a 15inch, so if you are a consumer who regularly works remotely, then this is a good option for you. 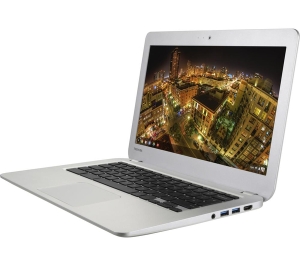 The images produced by the Chromebook are rich in detail; many laptops of this price bracket lack the clarity in dim light. The Chromebook 2 has also shed a few pounds in weight, from a healthy 1.5Kg down to 1.35Kg, which is a noticeable 10% decrease and makes carrying it around that more comfortable.

The Chromebook 2 is also very slightly thinner than the previous model adding to its portable and practical design (19.3mm compared to the previous models 20mm). Dropping weight and size without losing ports or performance is very important in this day and age and although the new model has one less USB option it still retains the HDMI port as well as a faster USB3 adapter on the left hand side.

Often on sleeker slimmer laptops that are more mobile, the manufacturers often have to sacrifice on battery power. However, on this model you could easily use this computer for the majority of the day without the need for the charger if you were prepared to opt for a lower screen brightness. On the highest power settings you’re likely to get around 7hrs 20 minutes of battery life, slightly up on the last Chromebook and respectable for the current market.

The indented dotted surface cover of the Chromebook 2 has a great tactile feel and brings some originality to the depth of design. The light grey finish, accompanied by the darker coloured keys is a commonly used contrast amongst many laptop brands.

The keyboard itself doesn’t contain any F function keys but instead uses a simple row of buttons with easy to read symbols that keep the layout simple and clutter free. The keys don’t have a huge depth to them but the spacing and arrangement felt easy to use and comfortable on the wrists even during long periods of typing. There is very little movement from the keyboard when depressing buttons which is a great sign Toshiba has markedly improved the build quality in this area.

The mouse-pad is well proportioned with the left and right buttons long dispensed with, it’s a doddle to get the hang of, suitable for computer users of all capabilities. The engineers at Toshiba have done a fantastic job of maintaining a look and feel you would associate with much more expensive laptops.

Toshiba have also teamed up with Skull Candy to provide a higher spec of sound system to this already impressive package. Skull candy originally focused on action sports products but this collaboration shows they are looking to expand into the gaming section of the market. User’s familiar with the brand will be pleasantly surprised by the level and quality of bass the units produce from such a streamlined design.

The powerful dual-core 2.16Ghz Intel Celeron processor is the heartbeat of this machine and certainly wasn’t found wanting, coping well with multiple tasks. It performed especially well when faced with complicated or advert-heavy websites. One of the biggest advances of a non-windows based operating system is there is less to tie up the computers RAM resulting in the Chromebook maximising its speed. If you’re a user who can cope without the extra functionality that windows provides then this is a fantastically fast tool.

The Chromebook 2 comes with 100GB of google online storage but in this case was used in conjunction with the Toshiba AeroCast portable hard drive. This cloud or offsite storage keeps the internal disk clear and enables the laptop to perform to its peak. It is easily the most effective way of storing data whilst the wireless capabilities of the drive aligned with its excellent selection of ports make it a great central hub for the home.

All in all the new Chromebook 2 is a good improvement on the previous version particularly due to the high-resolution screen, the speed of the interface along with the excellent portability. In an area of the laptop market which is flooded with cheap alternatives this machine really stands out from the crowd.