In a new era of downsizing for all car firms, Ferrari have made a significant move away from the big v10 and v12 blocks of previous generations and followed the example set by other manufacturers in producing a mid-engine 3.9litre v8 twin turbo.

The last twin turbo Ferrari produced was the quite brilliant F40 one of the most iconic supercars of all time and a bedroom wall icon of a generation, a car with a true legacy. The 488 is also the immediate replacement for the 458 Italia the most recent stripped out version, the speciale. Ferrari have a tall order to combine the drama and lightness of the F40’s turbo charged setup with the immediateness of the handling and throttle response of the speciale as well as stay true to the Gran Turismo Berlinetta’s heritage and styling, quite a challenge.

In terms of the power delivery Ferrari have not just passed with flying colours but almost re-written the rulebook. Gone is the turbo lag and boost of days gone by, the engineers have managed to produce an almost linear power delivery whilst maximising the huge torque. Even though the engine block is smaller in terms of the capacity than the 458 its 100hps up on power (670). As the 488 weighs in 200kg lighter than the f12 the acceleration is blisteringly quick, 0-62mph is dealt with in a mere 3 seconds.

Achieving incredible torque from the turbos is one thing; the relationship to the chassis is everything. The power needs to be manageable and has to be balanced with the mechanical grip and the new car does this brilliantly. Combine this with the all new ‘Slide slip control system’ (SSC2) the 488 is not only lightning fast and stiff in a straight line it allows the car to calculate the best possible cornering angle so the driver has so much control on the limit of grip. The active dampers and rear axle allow beginner and intermediate drivers to really experience the rear wheel drive setup so whilst this car is certainly a raging beast, it is a beast that can be controlled in the bends. 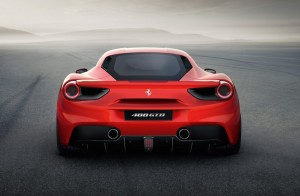 The clever driver settings allow the car to perform brilliantly on the both the track and the road. So many ‘sport’ setups make a car of this kind brutal on bumpy roads but as usual the Ferrari engineers have got this covered, the car rides beautifully on almost every surface. It remains fun not scary on windy roads and in auto mode is less aggressive than the 458.

The driving environment and controls share much with its predecessor, but the 488 is 85% brand new. As is the Ferrari way the steering remains light and precise to the smallest degree allowing the driver to hit every apex.

Ferrari produced one of the all-time greats in the 458 and lining up its replacement is the equivalent of going on stage after The Who or stepping onto court after Roger Federer, a pretty impossible act to follow? Well the 488GTB doesn’t disappoint the drama and sheer power of the turbo charged cars of the past combined perfectly with the computer powered precision of the modern day supercar. In a nutshell, Ferrari has reinvented the turbo-charged engine.

Look out for the review of the test drive coming shortly as we put this beast to the test….