Jaguar, the iconic British brand loved by those that crave the finer things in life have done it again with a new competitively priced-sports saloon that was just last week, launched into the UAE market by Al Tayer Motors.

Al Tayer Motors is the official UAE importer for Jaguar and Land Rover alike and has been tasked with launching this new model which saw media and car fanatics join together last week at the Four Seasons Resort Dubai for a glittering launch event.

The XE is the latest addition to Jaguar’s award-winning range which comprises of the XF, XJ and F-Type respectively.

The XE, with a starting price of AED 169,000 redefines the concept of the sports saloon and Jaguar think it’s a game changer.

“The Jaguar XE is one of the most exciting products to be launched by the brand in recent times and we strongly believe this car will drive Jaguar to the top of the competitive sports saloon segment.” Managing Director of Jaguar Land Rover Middle East, North Africa and Pakistan said, speaking at the event itself.

So what’s so special about this new Jag and is it really just a warm up act for the launch of the all-new Jaguar XF later in the year?

This new car is lightweight, streamlined and is undoubtedly luxurious but what’s more important is that it actually is an outstanding ride. It’s all testament to company founder Sir William Lyons’ vision that ‘The Car is the closest thing we will ever create to something that is alive’. 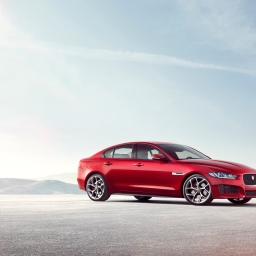 The Jaguar XE, with its turbo-charged, direct-injection 2.0-litre four-cyclinder engine (and that’s just to start) certainly sounds as if it’s alive. If that isn’t enough however, customers who demand even more superior performance (and let’s face it, it is the UAE) can opt for the Jaguar XE S which boasts an exhilarating engine note from idle right up to the redline, sharing its 340 PS supercharged 3.0-litre V6 with the lightweight F-TYPE sports car. It’s responsive and gosh is it quick! doing 0-100kmh in 5.1 seconds (0-60mph in 4.9 seconds).

The Jaguar XE is the first model developed from Jaguar Land Rover’s new modular vehicle architecture. The long 2,835mm wheelbase and low-seating position enable perfect proportions and  truly streamlined profile, a profile that has become synonymous with the Jaguar brand. It is also the only vehicle in its class to use an aluminium-intensive monocoque making it both extremely robust yet lightweight.

Of course what looks pretty on the outside needs to also be pretty on the inside and Jaguar certainly haven’t scrimped on the interior, It’s comfortable, spacious and made-up of luxurious materials and the perfect finishing touches that we have come to love about Jaguar craftmanship, in-fact it’s so beautiful it’s unlike anything else in its sector. There i a new InControl Touch infotainment system which takes centre stage with an innovative 8-inch touchscreen which allows for fast and easy access to all manner of functions. This car also has some of the most advanced driver assistance systems in the world with All Surface Progress Control which allows for the XE to electronically gain traction in seconds, ideal for use on low-grip surfaces such as snow-covered roads (admittedly not something we see in the UAE).

This car, the new Jaguar XE is the stiffest, most aerodynamic Jaguar saloon car ever built and we love it.