OKKU has been making waves and winning more than it’s fair share of awards since it’s inception. Located in The H Hotel, taking the prestigious address of Number 1. Sheikh Zayed Road, OKKU is THE Japanese restaurant and bar for those in the know and for those that don’t, you soon will do.

Primarily a small, dimly lit restaurant and lounge, OKKU has all the components of a winning-formula. If you overlook the fact that you need to enter the Hotel to get upstairs to the restaurant, tottering through in your finest is never ideal as hordes of gawping hotel guests look on, but this is soon forgotten as you enter OKKU. The harshly lit hotel lobby is replaced by dark everything. Walking up the smokey black gloss stairs (obligatory for any new venue in Dubai it seems) you enter a world of wonder. The long, bar is framed by giant glass tanks housing jellyfish that dance and move to the thumping music, they are so magical and it is such a unique touch that you could almost be anywhere in the world. A row of neon pink beaded curtains separate the bar and the restaurant which break up the darkness. It is all so sleek and so sassy you could easily be in a top nightclub as opposed to a restaurant. You’ll be glad you wore your heels. 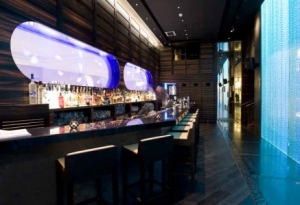 We decided to start of with a glass of bubbly at the bar, Bellinis seem sort of obligatory and so you can spend a good half an hour or so sipping away whilst never taking your eyes of the mesmerizing 8-metre jellyquarium.

OKKU is split into three main areas: the ultra-chic bar, the mezzanine lounge which includes secret VIP dining rooms and alcoves for privacy and the restaurant which fills up the centre of the space, all these separate spaces blend seamlessly into each other creating not only an intimate dining space but also a great late-night lounge. It’s one of those places that you want to see and be seen whilst pretending you don’t really want to.

Now, on a Thursday OKKU has just launched ‘Geisha House’ which promises to be a supperclub experience you won’t forget. There are of course, an abundance of supper clubs hitting the Dubai culinary scene but something told me OKKU would be different. I wasn’t wrong.

The focus here is on the food and the atmosphere. OKKU is of course, a Japanese restaurant with a menu that boasts everything from Ginger Salmon Sashimi to the famous Miso Black Cod. We were shown to our table, a fantastic private table tucked away at the back end of the restaurant which is great for smaller group dining. The idea behind ‘Geisha House’ is that it should be reflective of a dinner party with signature OKKU flair and a Japanese twist. The Japanese twist being that stunning Geisha’s keep you captivated all night long alongside the resident DJ who pumps out an eclectic mix of world-class music that adds to the overall clubby vibe.

The wild extravaganza takes a while to warm up and the staff at OKKU are more than attentive in keeping your glasses topped up and the food flowing. Small sharing dishes are brought to the table one after the other in a series of courses in your two hour sitting (bookings can be made for 8pm or 10pm). To start with Truffle Teriyaki Edamame beans alongside Ingen with Yuzen Truffle Aioli Tempura (Green beans in truffle to you and I) were brought out to the table and were easily the most delicious vegetarian entrees I’ve tasted, my fellow diners seemed to agree with me and these were demolished before the following course of Lobster Salad could even be brought to the table.

I had started to wonder at this point when the entertainment would begin but I was told it didn’t start until later, something to note if you opt for the earlier booking.

The Lobster Salad consisted of North Atlantic Lobster on an Asian Leave salad dressed in wafu-soy vinaigrette and it was duly noted by all parties at the table that it was rather a large portion that the 4 of us couldn’t even get through (you have to book your tables with a minimum of 4 guests for Geisha House). 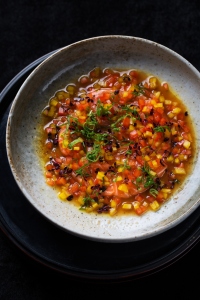 Small plates followed and we were treated to a selection of OKKU signature dishes created by OKKU’s celebrity super chefs who have also cooked for the Hollywood A list. Beef Tacos, an Avocado Volcano and tuna & Foie Gras Capaccio featured, all dressed beautifully and with a hint of truffle which seems to be a reoccurring ingredient at OKKU, not that we were disappointed. I used to say that a mark of a good restaurant was by how many of their dishes featured Truffle, based on this theory and this theory alone, OKKU is head and shoulders above the competition.

There was a slight break between our small and large plates which is welcome when you’ve filled up on such delicious food and we started to note the volume of the music, and indeed the tempo, had increased a notch, hd the wild extravagance we were promised started? The great thing about OKKU is you’re not really sure what is going to happen next, from surprise Geisha experiences to dancers and a whole parade of sparklers in champagne bottles, OKKU sure knows how to throw a dinner party.

For our large plates we were told me needed to switch the white to red wine which we dutifully did, never one to argue with an expert sommelier. We were presented with a bottle of Domaine De La Janasse Red, a deliciously warm, comforting red that was the perfect partner to our much-anicipated main course.  For fans of Black Cod, OKKU’s Yuzu-Saikyo Miso Black Cod is an absolute must even if you visit for this dish alone. The Yuzu-Saikyo Miso marinade on the flaky Atlantic Black Cod was infused perfectly and fell off your fork like warm butter. Alongside the Black Cod we feasted (literally) on Robata grilled chilli-miso Chicken Yakiniko with spring onion, asian leave and garlic scape and my personal favourite (only second to the Black Cod), Wagyu Himalayan Shioyaki aka perfectly cooked Wagyu Steak that is cooked theatrically on your table in a majestic flambe on a hot Himalayan salt stone, this is served with roquette, onions, garlic scape and garlic-soy and oroshi ponzu.

The music, the food, the drinks, the random entertainment… it all makes for one hell of an evening and is a great place to celebrate with friends. It’s a little expensive but it’s one of the few places in the area that is actually worth it. The quality of the food is perfect, the service attentive, the decor makes you want to shake off your napkin and get then shake your body to the music, add to this a never- ending array of eclectic entertainment and OKKU, you have yourself a perfect supper club.