It’s been a month since the Dyson Supersonic finally launched, rather catapulted, itself into the Middle East market and it’s reign shows no sign of slowing down.

This revolutionary hairdryer is a welcome addition to the Middle East’s beauty industry, where harsh climatic conditions and an abundance of air conditioning has had negative effects on the hair, making it not only dry but also unmanageable. The Dyson Supersonic aims to change this and in turn, change your life.

Whereas normal hair dryers are bulky and difficult to manoeuvre, the Dyson Supersonic is anything but. Not only does it look typically ‘ Dyson’ in its sleek, stylish pink and grey tones but it weighs much less making it much more convenient to hold.

But it’s not just its size that has been given a makeover, for this new hairdryer is tasked with drying hair that much faster and quieter. Using a fast but focused airflow, its engineered for balance in the hand and intelligently controls the temperature to help protect hair from extreme heat damage.

The Supersonic’s genius lies mostly in its motor. A tiny, non-descript piece of equipment at first glance but when you look deeper you notice something very different about the patented Dyson digital motor V9. Created in-house by a team of over 15 motor engineers, it is Dyson’s smallest, lightest and most advanced digital motor. It is up to eight times faster than any other hair dryer motors and half the weight. In addition, because the Dyson digital motor is engineered to be powerful yet compact it is small enough to be positioned in the handle rather than the head;because of this the machine is engineered for balance. Most conventional hair dryers have the motor in the head of the machine.

And you thought it was just a pretty and expensive face.
Using patented Air Multiplier technology the volume of the air drawn into this tiny motor is amplified by three, producing a high pressure, high velocity jet of air. Long gone are the days of weak, slow airflow thanks to this small but mighty machine. This focused jet of air allows for controlled, precise drying and styling, meaning you can dry and style at the same time.

What’s more, the Dyson Supersonic is engineered to be quieter than your average hairdryer. By using an axial-flow impeller inside the motor, the air’s pathway is simplified, meaning there is less turbulence. By giving the motor impeller 13 blades instead of the usual 11, the tone within the motor has been pushed.
And finally, by investing in a Dyson Supersonic, you are actually investing in your hair. We all know that extreme heat causes damage and with its intelligent heat control, the Supersonic ensures that your locks are not exposed to excessive temperatures.
A glass bead thermistor measures the temperature 20 times a second and transmits this data to the microprocessor, which intelligently controls the patented double-stacked heating element. Now, that’s science.
It took an investment of GBP 50 million to produce, 4 years of  painstaking investigation into hair from root to tip, the building of a bespoke hair laboratory, 1010 miles of human hair used in testing, 1o3 engineers and 600 prototypes, but the Dyson Supersonic has exceeded all expectations. 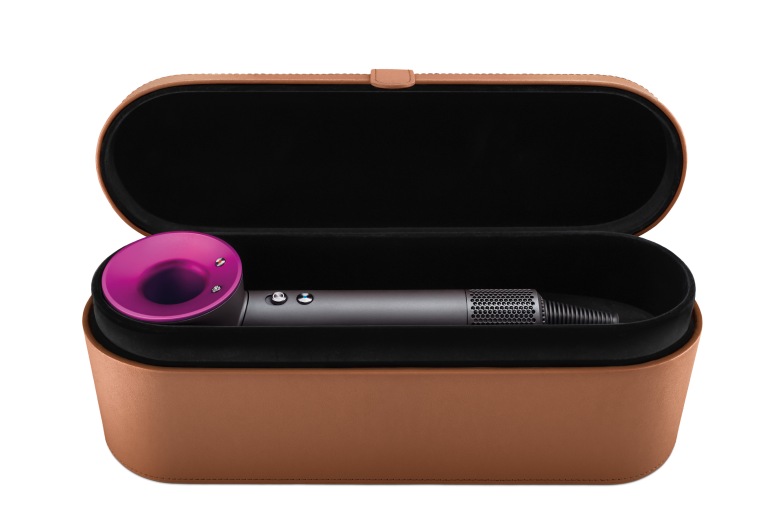 Yes it’s costly for a hairdryer but it’s the price you pay for the future of hair care and its available right here, right now in the Middle East and in our opinion, is worth every single penny.
Tune in to our social media channels to see the Dyson Supersonic in action @theinsideruae
Available now at all Sephora outlets across the UAE at AED1,499