Dubai: Home to the world’s tallest building and a man-made island shaped like a palm tree, it’s a city of architecture innovations and attractions in droves however, one thing it hasn’t boasted so far is a theme park. Well, all that is about to change.

Opening its doors this August, IMG Worlds Of Adventure is set to be the biggest indoor theme park ever. Of course it is. A whopping 1.5 million square feet has been unveiled just off Sheikh Mohammed Bin Zayed Road which will be split into four key zones to entertain each and every resident and visitor to Dubai alike, seven days a week.

The inspiration for the emirate’s latest attraction is from its own Los Valley Dinosaur Adventure concept, Cartoon Network and Marvel Comics, so expect animation, expect innovation and fantasies galore.  Shake hands with Iron Man or run rings around Spiderman before parading around this vast indoor metropolis with none other than the Powerpuff Girls.

What is even better is that as early-bird tickets go on sale this month, IMG Worlds Of Adventure have given us a sneak peak into what rides we can expect and as we’ve come to correctly assume with a part of the world known for its dizzy heights, they are none short of spectacular!

There will be 20 plus roller coasters, entertainment shows and a plethora of attractions. Street performers will grace IMG Boulevard and the live stage throughout the day, entertaining mesmerized passers by and Marvel films look to set to regionally premiere in the 12-screen Novo Cinema.

Children (and adults) will love the Lost Valley, a realistic dinosaur-themed land that showcases a collection of 70 prehistoric, life-sized (gulp) animatronic creatures which not only look real but move thanks to handy hydraulics and give the impression of breathing! For Brits amongst us that used to frequent London’s Natural History Museum as a child, you’d be right in drawing a parallel for IMG worked closely with Kokoro, a Japanese company specializing in animatronics and robotics, the very same responsible for the museum’s iconic attractions.

But what we really want to know about is the rides and rides you will have.  Partake in the ‘Battle of Ultron’ with the Avengers which is a dark ride featuring your favourite characters such as Thor, Black Widow and the Hulk.

Those with a need for speed will ‘love’ The Velociraptor, a rollercoaster that hits speeds of up to 100km in just 2.5 seconds! Weaving it’s way through the jungles of the Lost Valley out into the desert and back.

The Hulk reigns supreme and the innovative Hulk Epsilon Base 3D is set to be the first-of-its-kind 100 seater ride that uses both 360 projection screens along with motion to virtually propel guests through an immersive battle scene experience. It’s not all gravity-defying speeds and hair-raising rides however as the Dino Carousel is a much friendlier option for younger guests featuring a unique dinosaur themed carousel and The Ride of OOO with Finn & Jake is an amazing overhead scenic ride around the park for a true bird’s eye view of Dubai’s latest attraction. Prepare to be amazed! 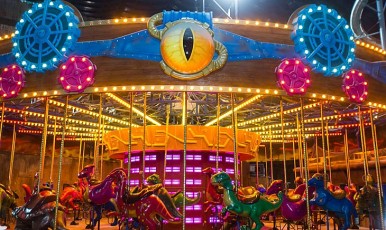 You can buy tickets from tomorrow (April 25th) for AED 250 for children and AED 300 for general admission. For more information, visit www.IMGworlds.com