The Ferrari GTC4Lusso is certainly an all new name but is it a whole new car? The car would be better defined as a reworking of the old FF. The four seater grand tourer will be its direct replacement. The car aims to still produce that unique Ferrari driving magic whilst allowing four people to appreciate it in the comfort of a spacious cabin, certainly a tall order. At first glance the first noticeable difference the car has from the FF is the styling.

Ferrari has completely reworked the rear end of the car and to my eyes for the better. The lines are strongly defined and the new twin taillight design complements the muscular structure perfectly. Ferrari has made some significant changes with aerodynamics in mind. In comes a triple fence diffuser as well as a new roof spoiler which helps the car retain its edgy sporting looks. Ferrari have also tweaked the front grill and inlets to improve air flow and cooling to the hugely powerful engine under the bonnet.

The previous FF was no slouch but the new GTC4Lusso is nigh on 30hp up on the old car. The 6.3litre V12 now produces 680 horse power which will catapult the car to 100kph in just 3.4 seconds. The top speed remains a hardly modest 335. With all these rampaging Italian horses under the hood the driver is going to need all the help they can get keeping the car under control. 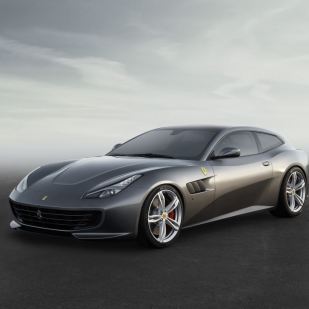 Technologically this car is another step up, integrating rear wheel steering with four-wheel drive in Ferrari’s new 4RM-S system. The Italian carmaker has dabbled with this idea in the previous F12tdf but they claim this will be the first GT car with such handling capabilities. Combined with the new suspension dampers they help to keep the driver in total control. The Ferrari that can be enjoyed anywhere on any surface. Snowy mountain roads, short spins or long highway cruising which is quite a feat. It will certainly drive like no other Ferrari has before and we look forward to putting it through its paces.

The all new cabin is referred to by Ferrari as the “dual cockpit”. The car is designed to be enjoyed by its passengers as well as the driver. Ferrari has given their in-car entertainment a revamp which boasts a new 10.25inch screen and great controls for the passenger. The steering wheel is designed to be as agronomical as possible and thanks to a smaller airbag is more compact than ever.

The name remains a little bit of a mishmash. The 550GTC harps back to Ferrari’s of yesteryear. The Lusso referring to the Berlinetta Lusso as seems to be the trend with recent new Ferrari’s. If it’s not a whole new vision for the GT, the GTC4Lusso is certainly a fantastic improvement.