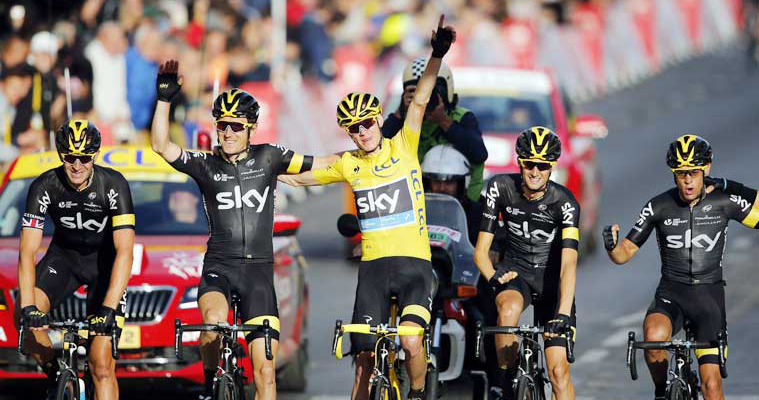 When the former performance director for British cycling Dave Brailsford founded Team Sky in February 2009 their brief was to produce a tour winner by 2015. As it stands today, they have achieved their third win in four years in the most prestigious Grand Tour in cycling. But has Team Sky’s involvement in the Tour de France gone further than simply putting a Brit on top of the podium?

In the era of ‘super clubs’ in sport, Team Sky are no different to the Toulon of French rugby or Manchester City of the EPL who’s huge foreign investment has bankrolled a shortcut to success. Although very little financial data is published by Team Sky, BskyB invested in excess of $25 million dollars in the team over the last year. Brailsford’s performance plan and outside-of-the-box thinking, allied to some very deep pockets has certainly raised the standard of athlete support and recovery as well as technological advances that the riders have benefitted from. The inherent danger is that cycling, like so many others, becomes a sport of haves and have not’s.

In the case of football, financial fair play legislation is slowly being integrated alongside measures to ensure clubs remain focused on home grown talent. In Rugby, players who chase the big wages in France’s premier division lose the right to represent their home countries. Is cycling going down the path Formula 1 is well travelled in, where the best car or team wins the championship not the best driver?  One of the reasons 6 time superbike champion Valentino Rossi is so admired across sporting divides is that he won his titles with 3 different teams.

This might also go some way to explaining the British public’s somewhat lukewarm recognition of Chris Froome. Is it simply that Britons have become too used to road race success in recent years?

In the post Armstrong era there is still a great deal of scepticism around doping and the legitimacy of top cycling performances at the tour, which could also go some way to explaining this attitude. Despite being spat at, had urine thrown at him and having his performances questioned on French television, Chris Froome has been a gracious and worthy champion. He has already surpassed Bradley Wiggins as the only British double tour De France winner. However, if he truly wants to be regarded as the greatest cyclist of a generation, Olympic success in the Velodrome or proving himself away from Team Sky might go some way to winning hearts and minds.

With so many sports so heavily influenced by technology how can we ever create a level playing field and truly decide who the best athlete or in this case best rider is? The International Cycling Union (UCI) has a huge responsibility over the coming years not just to rid the sport of the cheats who systematically blood dope but also to what some have described as technical doping. Whether that’s in the form of a team spending cap or whether it’s more uniformity to the bikes so that everyone has a fair chance of racing for the famous yellow jersey is up for debate.